They are who we thought they were. This game went exactly as expected. The Cowboys came out hot, scored Touchdowns and punted twice. The Browns, on the other hand, had 33 yards in the second half. This no name group of orphans on the Cowboys’ Defense continuously steps up and embraces the ‘next man up’ mentality. Even without S Barry Church and CB Morris Claiborne, the Browns only had 222 total yards and were 1-9 on third downs. As Defensive Coordinator, Rod Marinelli, would put it they were “solid, didn’t break, off the charts”.  Coach is a man of many words.

Dak played solid as well, completing 21 of 27 for 247 yards and 3 TDs with a career best 141.8 passer rating. What impressed me the most about Dak was his ability to reel Dez back in after a couple of missed Pass Interference calls. Dez was fuming as he went to line back up and Dak got him to keep his cool and focus. Dez finished with only 1 catch for 19 yards, but said, “At the end of the day we got that W”.

Back in the spot light this week was the future Hall of Famer himself, Jason Witten. Witten recorded his first 100 yard game since 2013 with 8 catches, 134 yards and 1 TD. This game wasn’t flashy, in fact, the longest run was 15 yards. Exactly the game that we needed, methodical, consistent, and about 30 minutes shorter than all the other games. Get in, get out and get home with the W. Zeke only rushed for 92 yards on 18 carries, but the stats were skewed as the majority of the starters sat most of the 4th quarter. The last drive of the game took 7:48 seconds, included 2 4th down conversions and 2 QB kneels from the victory formation inside the red zone.  The Cowboys eclipsed the 400 yard total offense for the 6th straight time, setting yet another record. The biggest stat of the day was Time of Possession. The Cowboys controlled the ball twice as long as their opponent (39:39-20:21) which allowed them to keep the clock running.

Defensively, Maliek Collins recorded his first 2 career sacks and after the game said he should have had a third. This team is the first “Team” we’ve seen. Nobody flashy, just a team of hard working guys who are in the right place and don’t beat themselves.

Pretty close again! The Browns converted 1 of those field goals into a TD and the Boys got all TDs. Dan Bailey was 0/0 on field goal attempts. 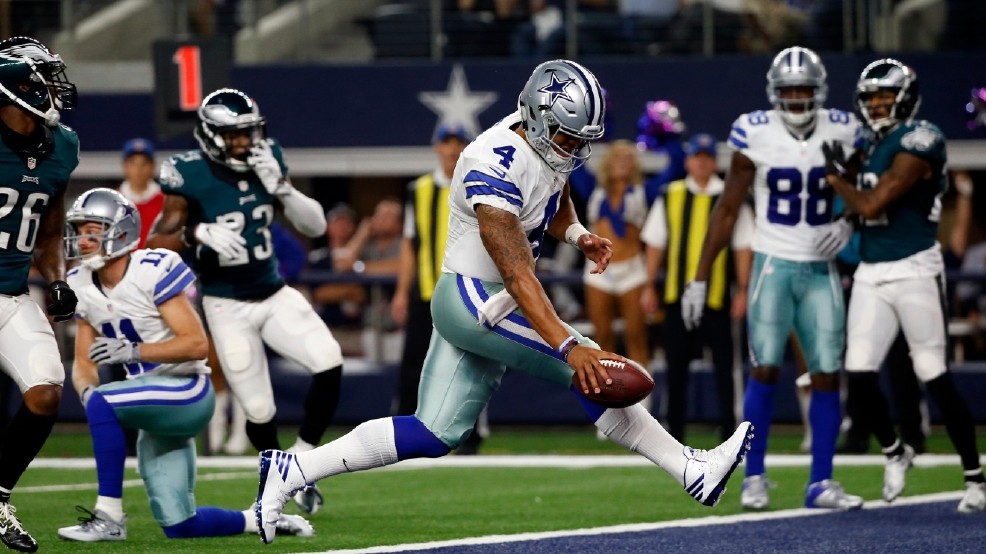